One of the Best

Balicasag and The Virgin Island

It hasn’t been straight forward; getting in and out of boats, walking on sand without a foot splint, staying up-right in surf, even so, yesterday was one of the best….

We’re currently staying on the island of Bohol and at 9am this morning we paid a couple of locals to take us out island hopping on their boat. When our friends said they were keen to head to the Philippines and asked if we fancied it, i couldn’t have said yes quicker. The main reason that I was so enthusiastic (aside from it being a desert island paradise) was because of all the incredible Filipino nurses i had got to know during my time in hospital. They are all good at their jobs, hard working and caring, but most importantly they have to be the happiest, friendliest people in the world. Im open to other suggestions for that title and I’m only speaking from experience, however unless the NHS only employ the happy ones then I’m pretty sure they will be hard to beat, and let me tell you, today has been no exception…. 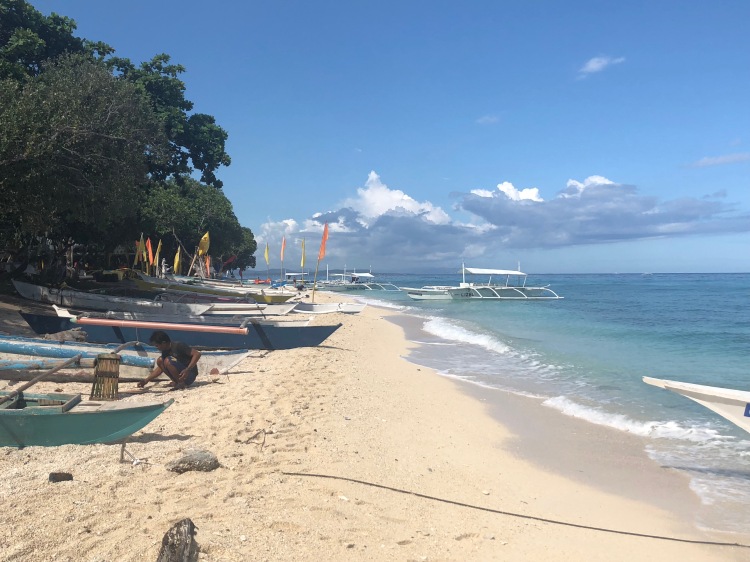 The classic Banca style boat captained by the Filipino version of the chuckle brothers took us an hour out from the white sanded coastline of Bohol to the even whiter sanded island of Balicasag. A dodgy dismount from the boat, a few stumbles up the beach and we found ourselves confronted with the aroma of barbecued meat and fish. To say it smelt good would be an understatement so we followed our noses along the shoreline until we found the culprit, an oil drum bbq surrounded by a few benches under palm trees just back from the beach. We were invited to take a seat and before we had a chance to order, the local family next to us started sending over plates of their food. I’m not just talking a few chips… platters of fresh crab, prawns and reef fish started landing on the table. We tried to say thank you for the offer but it really wasn’t necessary as we were about to order our own, but it fell on deaf ears and they insisted. Having clearly been caught that morning the food was nothing short of outstanding. We got chatting to the kids and they told us how it was their uncles place that they head to every weekend for a family lunch and to swim with the turtles. Confident and extremely well mannered it wasn’t long before they asked what was wrong with my leg. As I explained that it was actually my neck and showed them the scar followed by a myriad of others I have collected over the years, their eyes widened, not in pity but in fascination, the way only a kids eyes can. An hour passed and under the guidance of our new friends we said our goodbyes and headed out to the reef to do some snorkelling.

I love swimming, always have, especially in the sea. Since I was a kid, I would spend 90% of our holidays in the water, so much so that my mum christened me the water baby (not literally). My capabilities in the water have obviously been effected. The main contributors being the inability to hold my fingers together, the fact my left leg is almost useless when there is nothing to push against and my lung capacity is significantly less. Try swimming whilst holding your hands in fists and keeping one leg floppy and you will get some idea of what I’m dealing with. That said it has been improving through both practice and with me generally getting stronger but I haven’t been back in the sea so there was an air of uncertainty about what we were about to do. The uncertainty wasn’t around whether I would drown or not, I knew I would be fine but I wasn’t sure how fine, if you know what i mean…

One of the locals gave us a lift out to the edge of the reef and we jumped in. Immediately we were confronted with an explosion of colour. Sprawling corals and hundreds of fish spread out below us as we slowly started to explore. Moving around was fine, in fact possibly even easier than in a pool due to the extra buoyancy provided by the salty water. I used to dive quite a bit when I was younger so I knew what I really wanted to find was the drop off and the reef wall, which is almost always where all of the fun (big) stuff is. We continued further out along the reef which was probably about 10ft deep and then all of a sudden I saw the dark shadow of the lagoon appear just in front of us. The reef dropped away into blackness and almost as soon as we arrived a huge shoal of large fish passed below us. Colourful coral blooms and even more colourful fish covered the wall as far as you could see, The visibility was great but I knew that there would be more lurking lower out of sight and the urge to go and find out was too much. When we were on holiday my brother (also a water baby) and I would go out to the lagoon and then swim 10, 15, sometimes 20m down to the divers below just to tap them on the shoulder and give them the fright of their life. They would turn to look at their dive buddy who had just given them a nudge and instead were confronted by a 12 year old in speedos. A stupid game I know but it was better than being sat in front of the playstation i suppose… After a few practices I took a deep breathe and made my way down. There was an enormous pink fan coral perched on the edge of the wall so I aimed for that. Felling good as I approached I decided to equalise and kick on past to peer down into the abyss. Theres something quiet special about staring down into the blackness, it makes you feel incredibly vulnerable but it also gives you a feeling of genuine freedom that I can’t really put into words.

Deciding I shouldn’t push my luck any further I turned to face the reef wall and head back up. Just as I was about to take my first stroke I noticed a turtle snoozing amongst the corals. I managed to curb my enthusiasm and do the sensible thing… go and get some oxygen. Once I surfaced I shouted to the others to come over, after which I took the GoPro from Lois and headed back down for another look. If anyone has seen turtles in the wild before, they are the most chilled creatures in the ocean. As I approached he just slowly turned his gaze to me and carried on eating, completely unfazed by what was going on. I hung there for a moment enjoying his company and then not wanting to disturb his lunch for too long moved on along the wall and back to the surface. 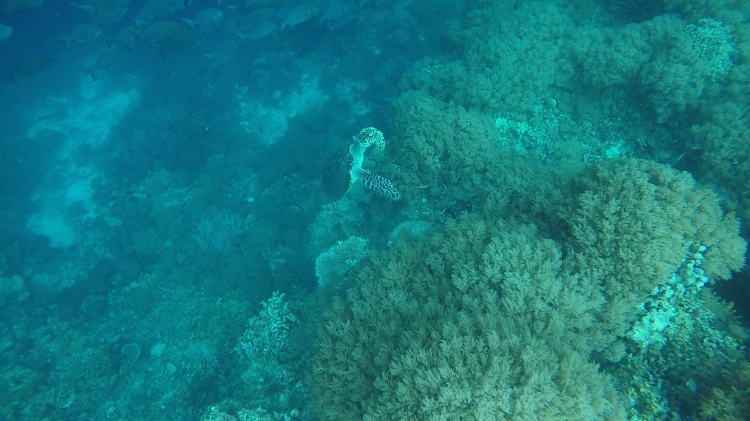 After hauling myself back into the canoe with all the elegance of drunken walrus I sat back gazed out to sea and tried to contemplate what had just happened. I hadn’t seen anything I had never seen before. I hadn’t gone deeper or longer than before, far from it. So why did I feel so happy, why was it that it felt like I had just had the experience of a lifetime?

I think it’s because in the water I now feel free again, free of all the issues I face on land. I’m not holding anyone up, I don’t need any help, but actually more than anything it has to come down to perspective. The twelve year old Ed in his Speedo’s would take being able to swim down a reef wall for granted. I was so happy because I forgot how it felt to do that, to float at 10m underwater, look around and just feel peaceful. Then it hit how close i came to never being able to experience that again, and that made me just feel overwhelmingly lucky.

On the way back to Bohol we stopped at the Virgin island, less of an island and more of a bank of chalk white sand only visible at low tide. The area is covered in stilted tables like a mini market, where locals come on their boats to sell fresh coconut and cook up squid. We arrived at high tide but stepping off the boat it was still only a few feet deep. It was late afternoon and we almost had the place to ourselves apart from an elderly couple packing up a stall before heading home on their boat. We waded through the crystal clear water towards where they were standing and were promptly offered two coconuts to which we gladly obliged. The man (we’ll call him Jeff) then disappeared behind his little stall and emerged holding two large sea urchins and a machete. I don’t have anything against sea urchins particularly but as he approached with a glint in his eye I started to hope that machete was for them and not us. Worries were quickly dashed to one side as a single skilful swipe of the blade turned 1 urchin into 2. ‘It’s good, you like’ he assured me as he poured the snot like contents out of the shell and into my hand. Appetising wouldn’t have been high up on my list of adjectives to describe the way it looked however. Not wanting to insult Jeff and never one to shy away from new experiences I took a big slurp and it was gone. Im happy to report that although they wouldn’t be in my top ten ocean dwelling foods, they’re actually quite nice and certainly not as bad as they look. 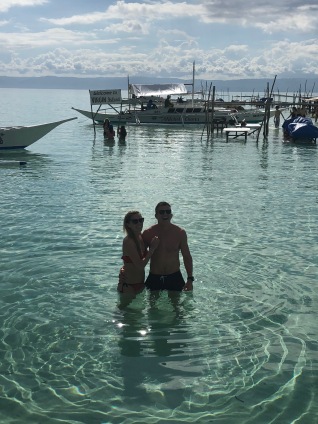 Whilst we all sat down and took in the surroundings we saw Jeff wandering away and looking for something in the water. After 10 minutes he returned with two starfish. He had overheard Vicki mentioning she saw someone having a photo with one at this very place so had gone out of his way to find one for her. Just remember these two (Jeff and Barbara) were packing up to leave as we arrived and now it was half an hour later and they were still trying to do things for us. As they finally boarded their boat we offered them some money at least for the food if not just for their inconvenience. They just smiled, said ‘no money, it’s ok’, and sailed off back to the mainland.

The last leg of the journey back home got me thinking again. I had been offered more today from strangers than I have in the previous 5 years. Most of these people are living a subsistence lifestyle, all of their hard earned money goes on food, water and shelter and yet they are more than happy to share anything they have. Many of us spend most of our lives consumed with growing our lot and furthering our own interests whilst paying little regard for anyone around us. So if we’re so convinced that being richer or more successful is what we need in life then why are the majority of us miserable and all of these Filipinos with hardly any money so happy. Sure they live in paradise which probably helps but on the face of it I would put it down to one thing. They’re kind, and they genuinely care about others.

Being kind and being happy go hand in hand. If you’re feeling down, instead of concentrating on trying to make yourself happier, try making someone else happy instead… it works a lot better. ✌️